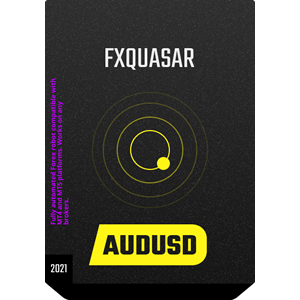 FXQuasar EA is the newest Forex robot represented on the InsiderFX, which obviously needs to have a review since the robot shows high profitability and stable work for a long trading period. Let’s discover the main pros and cons of the FXQuasar Forex robot in this EA review.

FXQuasar Forex robot has got one real live trading account on Myfxbook third-party platform which works on the AUDUSD currency pair for 16 months already. Live trading on the account started in July 2020 with a $2000 deposit. FXQuasar EA has made 466% of profit during the trading period of 16 months. The trading curve of this live graph of the system has a strong upward trend and has almost no sharp edges or drawdowns as it could be appearing due to fast account growth.

The system has got 2 backtests that show some possible trading potential of the system on the historical quotes. These backtests graphs show the difference and correlation between different settings of the FXQuasar EA. The first backtest shows the trading possibilities of the robot using 100% risk settings, and the other one shows backtest results using only 35% risk settings.

Both backtests are made on a 1H timeframe using every tick backtesting model, which is the most precise method based on all available least timeframes. The backtests’ modeling quality is 90%, which is fine for the FXQuasar EA because it does not use a scalping strategy. Both backtests were made using 6 years of historical quotes (from 2015 to 2021) which is more than enough for the proper assessment.

Real trading of FXQuasar EA on the live account that we’re about to analyze starts in July 2020 or more than 16 months ago with the initial deposit of $2000. The system has managed to grow the account by 466.41% so far, which is pretty good results as for the system that got only 32.77% of drawdown level and monthly growth of 12.09%. Trading results of this Forex robot are enough to say that the FXQuasar is one of the profitable EAs on InsiderFX. Here is a screenshot of the real performance data of the FXQuasar EA taken from the Myfxbook website.

he FXQuasar EA shows good durability and is well-made for long-term trading, as it makes 3 times more profitable trades than losing once and had almost no fixed drawdowns that would have damaged the upward growing trading curve. Of course, the system has got a bit high floating drawdown level of 32.77% but as we can see, the system successfully managed to avoid the drawdowns to become fixed and grew the account.

With that said, the FXQuasar EA system has managed to be profitable and safe during 16 months of trading with real money and hasn’t got long fixed drawdowns. Moreover, FXQuasar has gained 466% of total profit, having the rate of 12% of monthly profit. We can calculate an approximate profit to drawdown ratio of the system, which is around 0.4:1. This is not the best ratio among all the systems, but still, the system is pretty reliable and has the potential to be a profitable one.

FXQuasar EA is a fully automated Forex robot compatible with both MetaTrader 4 and MetaTrader 5 which has a real trading statistic that is being deeply analyzed in this Forex robot review of FXQuasar EA.

The developer explains the trading logic of the FXQuasar EA in the three-step guide on the robots’ official website. The main idea of the FXQuasar is that it does not use any indicators but instead, it used specific Market analysis algorithms crafted by the developer specifically and exclusively for this Forex robot.

There is no detailed info about the logic of the analysis, but we know that it works directly with quotes and internal algorithms for analyzing the current market situation, as well as analyzing price movements over the past few days. Based on the results obtained, it decides whether to open a trade or wait and in which direction to trade.

Another important thing that sets this Forex robot apart from others is the 6-sessions trading principle that is used entirely through all the trading processes of the FXQuasar EA. Basically, there are 6 trading sessions that the EA can follow. Three sessions for each “buy” or “sell” trading direction. Independent work of those sessions according to the long or short point of view provides the best profitability and reliability for both trading directions.

The last but not least important is the security of the system which is also covered by the developer. The FXQuasar EA is equipped with a special risk limit system that protects the trading account from unexpected losses. As we can see from the trading statistics of the FXQuasar EA, this system works pretty well. Here is the screenshot from the official robots’ website where the developer shortly explains the trading logic specificity. 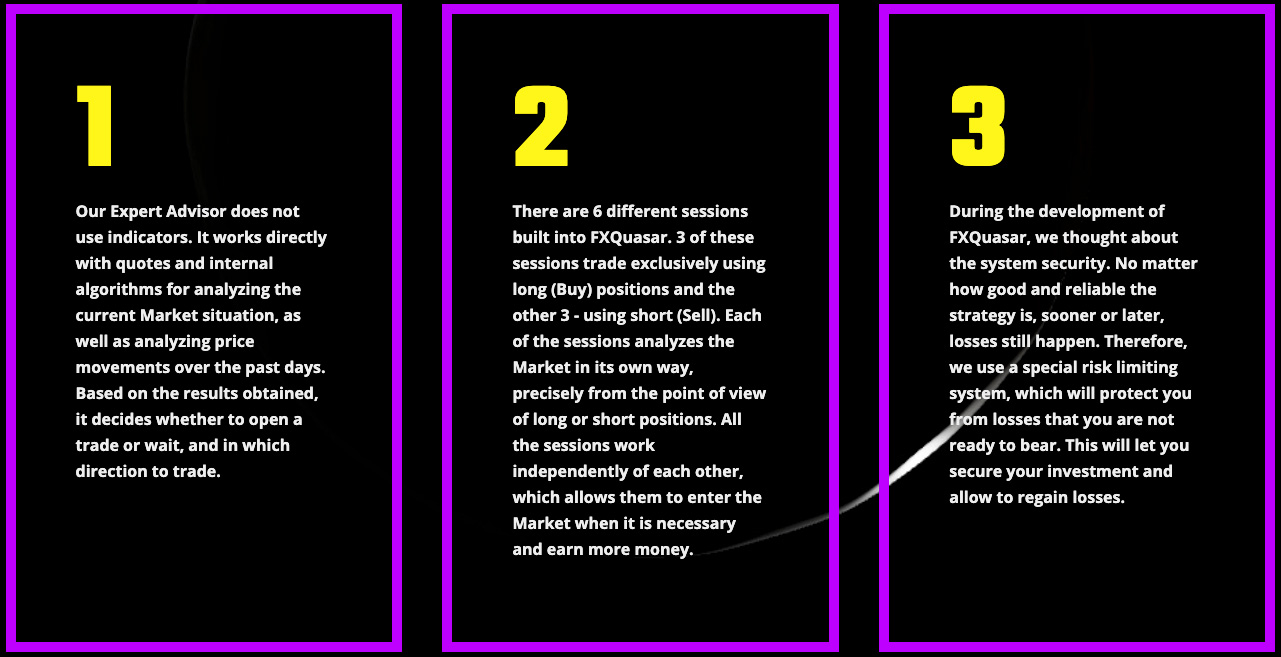 FXQuasar EA does not use a scalping strategy as well as it does not use Martingale. As we can see from the live trading graphs, the system uses a fixed lot size of 0.20 and sometimes rises it to 0.60 or 1.02. It is obviously made to recover losses that the robot faces. There are also some unknown for us pips size calculation that the system uses to recover the losses, but the original pre-set pips amount for regular trades is 40 pips. As we also can see, sometimes the system closes small grids that still use no Martingale multiplication of the lot size. Look at the screenshot below to see all mentioned features. 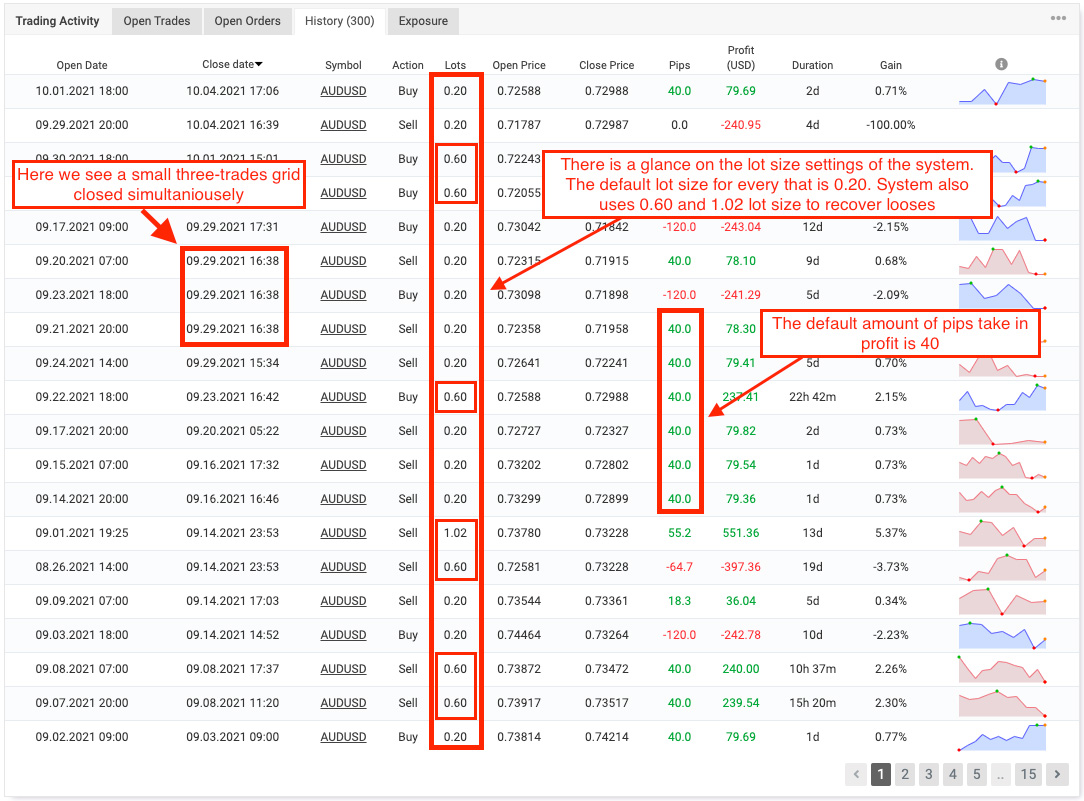 The FXQuasar EA has made 299 trades since the beginning of the live trading. 73% of them were winning once and only 27% were losing trades. This means that the FXQuasar Forex robot makes 3 times more profitable than the losing trades, which is a wonderful result that ensures it a place among the most reliable Forex robots.

Having made 299 trades during all the 16 months of live trading statistics, we can assume that the system does approximately 20 trades per month which is a normal amount.

The average trades duration of FXQuasar EA is a bit wide-ranged. Most of the trades are usually closed by the FXQuasar EA in the range from 1 hour to 6 days, but there are also some trades that can be kept longer up to 16 or 20 days.

FXQuasar is one of those Forex trading systems that might not be claimed best but is still well-crafted and does its work pretty well. There are no big problems with this robot, which could be the reason to call it unprofitable or unreliable. So, the FXQuasar Forex robot looks like quite a workhorse that might be bringing profits and still keeping your funds safe from losses.

The uncommon attitude toward building the trading strategy released in a form of FXQuasar EA deserves praise and good final marks. Also, the work done to craft the analyzing algorithm and 6 session trading logic at the core of the system together with the security settings are wonderful.